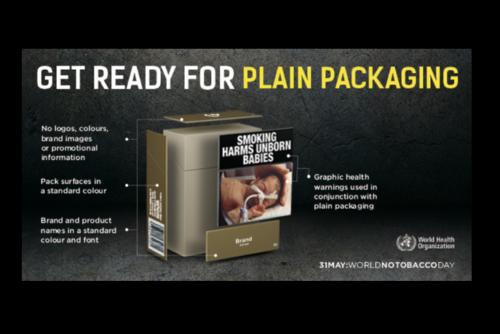 In 1998, Dr. Gro Harlem Brundtland was appointed as Director General (DG) of the World Health Organization (WHO). The Tobacco Free Initiative (TFI) was one of two early “pathfinder projects” initiated by Brundtland, along with Roll Back Malaria. TFI was tasked with addressing the drivers of a growing disease burden focused on non-communicable disease (NCDs), and used the Framework Convention on Tobacco Control (FCTC) as the primary vehicle to facilitate progress.

A decade prior to the establishment of TFI in 1998, the World Health Assembly passed a resolution to celebrate World No Tobacco Day each year to highlight the health risks associated with tobacco and the need for individual and community actions. This year, WHO and the Secretariat of the WHO FCTC encourage countries to adopt plain packaging of tobacco products. Plain packaging can operate as a demand reduction measure by impacting the attractiveness of tobacco products, limiting the use of tobacco packaging as a form of marketing and advertising, minimizing misleading labeling and packaging, and enhancing the effectiveness of health warnings.

WHO’s focus for World No Tobacco Day follows a landmark court decision in the UK that rejects Big Tobacco’s appeals against plain packaging for cigarettes. At this year’s World Health Assembly, DG Margaret Chan noted the UK ruling and the decision of “one tobacco giant… not to appeal.” Philip Morris International (PMI) will not appeal, and has instead indicated that they will focus on developing and commercializing reduced-risk products. In their public response, PMI believes these products will benefit smokers and public health more significantly than plain packaging.

If plain packaging is indeed an effective deterrent, it would slow the number of new smokers, potentially reducing deaths in the next 30 to 50 years. If harm reduction was embraced by WHO and the broader global community, the impact would be far greater and health gains among the current 1 billion smokers would be realized in the next 10 to 20 years. On today’s World No Tobacco Day, we should encourage smokers to quit using all effective approaches, including the new generation of reduced-risk tobacco products.

What are you doing to support efforts for World No Tobacco Day? We would be interested to hear from you! Tweet @VitalityUSA, Derek @swimdaily, or Gillian @gchristie34.