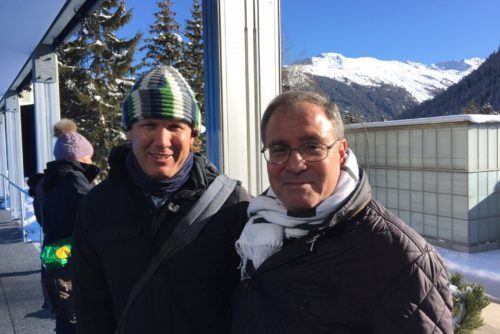 Each year in Davos-Klosters, Switzerland, the World Economic Forum hosts their Annual Meeting. This year’s Annual Meeting had the theme of Responsive and Responsible Leadership. Following my return, I wanted to share my conclusions with you from the Annual Meeting and discuss their implications for business and health.

There were two overarching conclusions related to business that came through during this year’s Annual Meeting. This first was the decline in trust among institutions, as indicated in the 2017 Edelman Trust Barometer. The Edelman Trust Barometer is a measure of trust across four types of institutions: government, business, media, and NGOs. The 2017 findings reveal the largest-ever drop in trust, with 53% of respondents believing that the current system has failed them. CEO credibility dropped 12 points to a low of 37%, while government leaders (29%) remain the least credible. Of the four institutions, Edelman argues that business is viewed as the only one that can make a difference.

The second macro conclusion pertaining to business was the contrast in American and Chinese leadership speeches in recent days. The President of China, Xi Jinping, discussed the need for globalization to promote economic and societal well-being for China and the world at the Annual Meeting. President Jinping’s remarks were in stark contrast to President Donald Trump’s inauguration speech. A selection of leading policymakers view President Jinping’s speech as the most significant speech by a Chinese official in more than 30 years, signaling a sharp shift to the “east” as the future driver of growth.

For health specifically, there were three major conclusions. Firstly, pandemic preparedness continues to dominate global discussions, with the announcement of new partnerships. Bill Gates announced the Coalition for Epidemic Preparedness Innovations (CEPI), which was founded by the Bill & Melinda Gates Foundation, the governments of India and Norway, the Wellcome Trust, and the World Economic Forum. CEPI will work to rapidly build vaccines to outpace pandemics. This should move the world from a reactive mode as the next epidemic hits to a more proactive one.

Secondly, there is an increased focus on addressing chronic diseases within the realm of the United Nations Sustainable Development Goals. There are now more than 50 companies that are in the World Economic Forum’s Global Health and Healthcare Partnership Community that are advocating for actions to target chronic diseases. The World Economic Forum-Willis Towers Watson report that features a case study of Vitality is one example of promoting better health using behavioral economics. It indicates how insurers, technology companies, and retailers are playing key roles in promoting better health, and how this should increase over time.

Finally, shared value and responsible leadership approaches continue to gain traction in health. I moderated a roundtable on Shared Value Insurance hosted by FSG in partnership with IAG and Discovery/Vitality to define and outline best practices on Shared Value Insurance. There was broad recognition of the need for insurers to move from waiting for and paying for catastrophes – be they related to weather or health – to dynamically supporting predictive and preventive interventions to lessen their occurrence and impact. Vitality’s Life, Health, and Motor Vehicle products are pioneering this approach.

The shared value theme was evident in the new report of the Business Commission for Sustainable Development with its explicit focus on advancing sustainable development through business partnerships.

Overall, this year’s World Economic Forum Annual Meeting clearly demonstrated the need for businesses to step up to the challenges of promoting better health through their business models. The global political environment will demand their strong leadership and creative mindset.

Were you at the World Economic Forum Annual Meeting? How does the WEF’s work inform your own? Tweet at Derek Yach @swimdaily or Vitality @VitalityUSA.